Nederlandse versie is in bewerking!

In the early sixties, I became very much interested in playing the electric guitar. Back then, there was not such an extended choice of brands and models as there is today. Fortunately it happened that I became friends with a guy named Roy Hendrik who was already involved in building his own electric guitar. Since this idea was very appealing to me and because I did not have enough money to buy one, we started to put our ideas and means together.
We also were very lucky with our starting conditions. My grandfather had a complete range of woodworking machinery in his company. Roy, who was a few years older than me, was already working in a tooling company where he could make the metal parts we needed. In a nearby village there was a small furniture manufacturer where we could buy our wood.

When the company that Roy worked for ceased all activities around 1970, he moved to another town and I continued making guitars on my own. In the meantime I studied mechanical engineering and played in several bands as a guitar & pedal steel player.
After graduating as an engineer, I work for some years on a 9 to 5 job. However, it did not combine very well with playing in bands and coming home late in the nigth. I also was not feeling very comfortable being restricted by a steady job. Finally, I decided to turn my hobby into my profession and quit the job to become a fulltime luthier in 1984.

On the road as a bass player 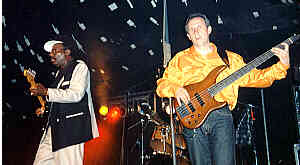 Touring with The Percy Strother Band